Eleuthera is approximately 225 miles SE of Miami and Ft Lauderdale Florida and 50 miles east of Nassau, Bahamas.  There are three Airports on Eleuthera; North Eleuthera, Governors Harbour and Rock Sound.  A non-stop flight takes just over an hour from Florida hour and about 30 minutes from Nassau.
The North Eleuthera Airport (ELH) is located at the northern tip of the island and typically has the most flight options from the U.S.  If you are staying on the northern end of the island or going to Harbour Island or Spanish Wells you should fly into ELH.
The Governors Harbour Airport (GHB) is the most centrally located airport, only a few miles from the Governors Harbour Settlement.  If you are staying in the central area of the island, where most of the vacation rentals are located, than GHB is the preferred airport.  There have been some recent changes in the airlines and flights schedules from Florida to GHB.  These have led to fewer flight options into GHB and they are typically more expensive so it may be worth it to fly into ELH and make the scenic one hour drive south to Governors Harbour.  You can take a taxi from ELH to GHB for around $100-$150.
The Rock Sound Airport (RSD) is the smallest airport and the farthest south.   Direct fight options from the U.S. are very limited but there are quite a few flights from Nassau.  It is the most convenient airport to fly into if you are staying on the South or South Central part of Eleuthera.

When traveling to/from the U.S. you have three location options for direct flights to Eleuthera.  Either Ft. Lauderdale or Miami Florida or Nassau Bahamas.  For some connecting through Florida is the most convenient, but connecting in Nassau generally offers more flexible and affordable options.  If you are traveling from Canada connecting in Nassau is generally your best option.  Flights in the Bahamas can be inconsistent, sometimes they are early sometimes they are late, sometimes they get canceled at the last minute and surprising enough occasionally they're even on time. Prepare yourself for the possibility that your flight schedule may no go as planned.

Bahamas Fast Ferries:
Medium and high speed ferries travel from Nassau to Spanish Wells, Harbour Island, Current or Governors Harbour. Schedule and destination has been undergoing some recent changes and varies by season, please check their website for the most recent information.

For international travel from the U.S. to the Bahamas you will need a valid passport, which will not expire within 6 months of your departure date.  For entry requirements to the Bahamas from other countries please see the bahamas.gov website.

When you get to Eleuthera (if you did not already pass through customs in Nassau) customs is usually a quick and easy process, we have made it through in as little as 15-20 minutes.  You will need to fill out an immigration form stating where you are staying and how long you will be there; you will keep part of this till you leave.  You will also need to verbally declare what is in your luggage.  When you are done a porter will grab your bags and take them your rental car or taxi, don’t forget to tip them.  Customs in Nassau is an entirely different story and please allow yourself a minimum of 2 hours between connecting flights.  You are allowed to bring in $100 worth of goods for consumption per person ( bring receipts), 50 cigars, 200 cigarettes or one pound of tobacco, and one quart of spirits.  When you leave that there is a $20 departure fee per person, payable by cash only.  The major airlines typically add this fee to your airline ticket but most of the smaller ones don’t so make sure to double check and bring cash will you to the airport when you leave.  You can take up to $800 worth of purchases home duty free, and then you will be charged a 10% duty for the next $1000.  You can take 50 cigarettes plus, one (Canada) or two (U.S.) liters of liquor or wine home. Exact amounts depend on your country of origin.

Getting Around the Island:

It is highly recommended that you rent a car while on Eleuthera.  At 110 miles long the only way to fully experience what Eleuthera has to offer is to explore it with a vehicle.  The main highway is rough and narrow and is not designed to safely accommodate people on foot or bicycle.  Cab fares are expensive and can run you much more than what it would cost for a vehicle rental for the day.  Unless you are staying one of the very few resorts that have a great beach, bar and restaurant and never plan to leave, you will want a rental car.

There is one main motorway called the Queens Highway that spans almost the entire length of the island.  The highway is paved, but there are no lines painted on the roads and there are numerous potholes.  Remember to DRIVE ON THE LEFT and always wear your seat belt if you are caught without it you could face a $300 fine.  The speed limit is 45mph on the highways and 15mph in the settlements.  If you get a local or faster driver behind you pull over as soon as you can to let them pass.  Always be cautious of other drivers, the locals drive fast and are known to occasionally pass on blind corners.

Vehicles rentals range from $50 to $85 a day depending on vehicle type, size and the duration of your rental.  Gas prices are currently over $6.00 a gallon.  There are no large car rental agencies like Budget or Hertz on Eleuthera, all vehicle rentals are through local Bahamians.  Renting a vehicle is a very casual experience on Eleuthera; whomever you rent from will meet you at the airport and have a car or SUV ready for you.  You will most likely pay cash and you may or may not have a simple contract for you to sign.  Due to the high cost of importing vehicles they tend to be worn older model vehicles, so keep your standards low.  Just call one of the individuals below, tell them the size you of vehicle need and what type of vehicle you want. Most will deliver to a different airport for a small fee.  If you are planning on doing some exploring off the main roads make sure
you have an inflated spare tire and a jack.

Before renting a vehicle check with your vacation rental provider for recommendations.  Quite often their caretakers (many are on the list below) will also rent vehicles. 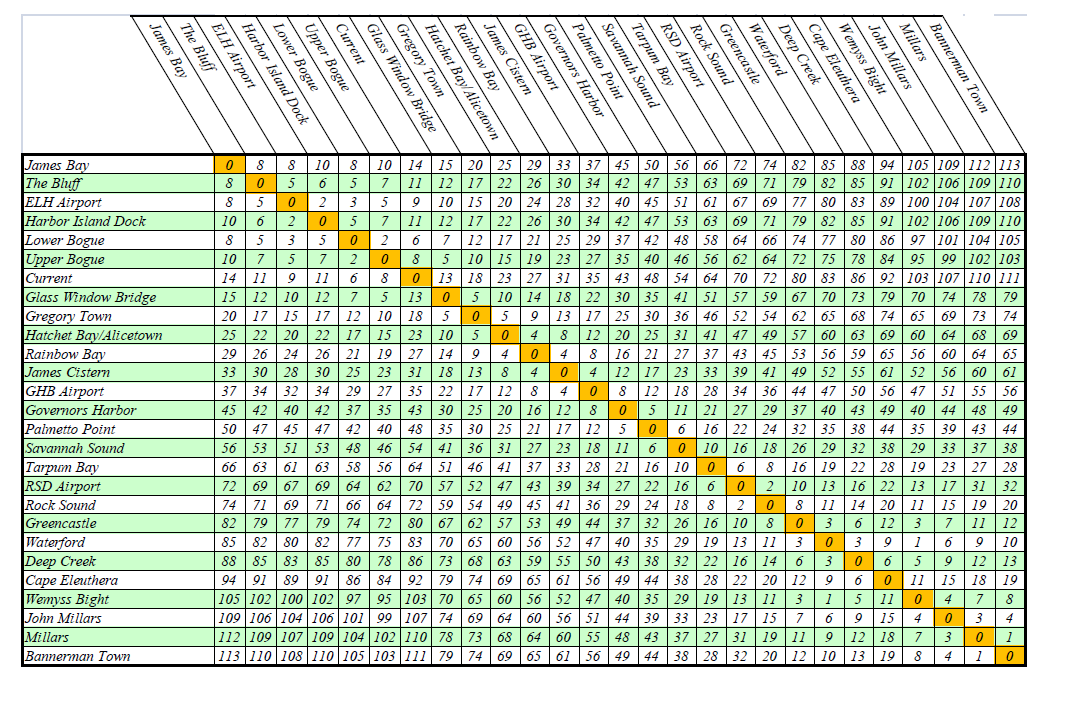